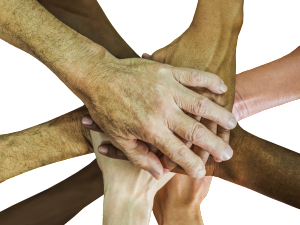 Studies have shown that a company’s atmosphere is what makes the difference between being profitable and unprofitable. Companies that have an atmosphere of encouragement tend to be highly profitable while companies that have interoffice friction or simply don’t promote encouragement typically are barely making it or actually losing money. Since most people would prefer to have a wildly profitable company over a struggling one I listed six great ways to encourage in the office.

1. Greet each other – yes this is a profound one but simply walking in the office each day, smiling and making sure everyone is greeted in your office lifts the spirits and encourages those who are recipients.

2. Use praise in abundance – when someone makes a great sale go out of your way to make a big deal out of it. When a coworker gets something done on time make sure they know how much you appreciate it. If an employee is having a hard day take the time to sit down and listen. This is not rocket science it’s simply letting people know you care.

3. Talk about victories in weekly meetings – it’s easy to get caught up in numbers, bills, problems and issues during a weekly meeting. So instead of bringing up the issues and problems right away start the meeting by quickly talking about a victory they’ve had in the past week. This will allow them to reflect on how awesome that victory felt and it also allows everyone to share in the victory.

4. Send out testimonials for all to read – The only thing better than a testimonial is a testimonial shared. Sometimes employees forget why they are doing what they do, then they read an amazing testimonial and all of a sudden they remember why they love their job so much. Good moral creates great encouragement.

5. Keep an open door – People need to know you’re accessible and that you won’t judge them. So keep an open door that allows people to tell you what’s happening and even if you don’t like what you hear make sure you thank them. If employees feel you are unapproachable they will start to talk behind your back and in no time at all you will be dealing with a toxic atmosphere.

6. Say “THANK YOU” – yes this seems so simple but companies such as chick-fil-A have literally built their business around using those two words… Get used to saying thank you over and over again to both coworkers and clients and watch how they react, then watch how your business grows!

There are plenty of ways to encourage but if you can just remember this one scripture the rest will follow: Ephesians 4:29

29 Do not let any unwholesome talk come out of your mouths, but only what is helpful for building others up according to their needs, that it may benefit those who listen.